Local director Lindsay Barrasse has submitted her short film “CHEYENNE” to HBO’s Project Greenlight, a contest for a chance to direct a feature film.  “CHEYENNE” is a silent visual piece, juxtaposing the dismal present with a happier past.  You can sign up to judge entries at www.projectgreenlight.com.

That’s right! IRON REELS returns for a special one-off open screening during the Vintage’s annual 24-art explosion.  As always, we’ll bring a projector and PA, you’ll bring the best (or worst, or diamond-in-the-roughest) cuts of ANYTHING you’re working on, or completing; the audience will bring their best constructive feedback.  Sign-ups start at 10pm, the screening runs from 10:30-Midnight.  Come early for a live music DRAWING SOCIAL from 7pm-10pm and stay late for the midnight STORY SLAM!  It’s going to be a blast, you don’t want to miss it!

We held a challenge for last month’s Short Film Fest at the Vintage: Two lines of dialogue, choice of three genres, one prop, a character name; two weeks to make a five-minute short film.

Chosen by audience vote, the second place winner was “Eli,” a charming claymation by soon-to-be film student, challenge seeker, and self-taught animator Ben Doran.  Ben has been interested in film and animation since he was 9 and uses contests and challenges to build his skills.  He mostly works with claymation and stop motion, but also dabbles in Flash and Cel animation.  He will enter the Rochester Institute of Technology’s Film and Animation program in the fall.

His challenge assignment was:
Experimental / Yo-Yo / The Big Guy / “Who Broke My Robot?”

Ben created his characters by hand-sewing cloth over wire armatures, then clay modelling the heads and hands.  This allowed more flexibility with less chance of the models falling apart.  Ben was asked several times how he made the Yo-Yo throws at the festival.  “To be honest they are all kind of over thinking it. I had 6 different lengths of rigid wire, and replaced them to get progressively longer.  The wire looked like string in miniature and kept the yo-yo out straight.”

Check out ‘Claydogh’ on Vimeo for more from Ben Doran.

Second Place won a $50 gift certificate to Voyager Video and a pair of tickets to Invasion of the Body Snatchers screening at the FM Kirby Center.

We had a great turnout with a sold out show! In case you missed it, here are a few images from the event.

Hey y’all, IRON REELS RETURNS to the Ritz next Friday for the second open screening.  Much like last time, we’ll have a projector, screen, laptop, and sound system.  Much like last time, YOU will have your films, videos, work-in-projects, screenplays, whatever to show on our screen. . Much like last time, the audience will have constructive things to say about your projects.  It’s going on as part of First Friday, so come after ingesting the rest of NEPA’s anthracitic art explosion.

Iron Reels held our first of hopefully many open screenings on Jan. 3rd. for First Friday at the historic Ritz building in Scranton.  It goes like this… You bring whatever you’re working on: script, scene, finished shorts, works in progress, promos, ads, concept sketches, whatever; and then get and give feedback on your work and other’s work.  Even non-filmic audience members gave constructive commentary on the pieces.  The maiden voyage brought us an animated music video, surrealist newscast, a college art department promo video, and a comedic satire.  What’ll you bring next time?

We’re holding the next open screening on Friday, February 7th, 8PM at the Ritz. Be there.

Mini Golf Massacre is a HUGE improvement over Keller’s last film, Deatherman. At 32 minutes, the piece doesn’t really drag. The speaking scenes all use multiple cuts and angles (some effective, others, not so much). The writing is tighter, the actors flow somewhat.

Unlike Deatherman, where the entire film used dirty wides to show all of the action, Keller uses a healthy selection of cut aways, camera tracking, and reverse zooms. For example, the introduction shot starts tight on Mr. Puttz juggling golf balls, pulls to the sale counter. Approximately ten minutes in, the style breaks during a filter-heavy drinking scene. It’s aesthetically reminiscent of a troma scene, or an early music video.

Like Deatherman, the death scenes carry the piece. Keller uses some absurd and inventive murder methods, including death-by-batting-cage-pitch-machine, a severed hand in a golf hole, and a decapitated head rolling down the course waterfall. The characters are not really developed. Instead, we get caricature snippets: the greedy boss, the disgruntled employee, the broski barkeep. 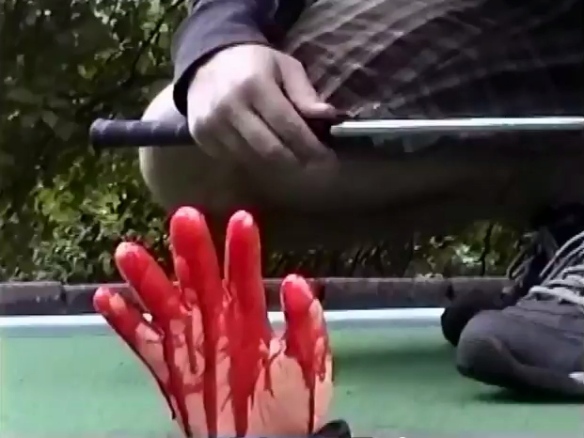 The film has some technical issues. The audio levels fluctuate widely between shots. There’s loud outdoor wind one second, no sound the next. Noise often overpowers the dialogue. The backgrounds are brighter than the actors with lots of blown-out whites. Exposure control? Everything is in focus most of the time, there’s minimal depth of field. It’s not easy on the eyes or ears.

We’re not sure whether this is intentional, but the film raises an interesting moral question.  When attacked by the killer, one of the girls takes a chainsaw and chops up the masked marauder. The murderer’s murders justify the hasty counter-kill.  Social commentary on stand-your-ground-laws?  The film has dystopian threads through Mr. Puttz’ character.  The barkeep sounds an alarm when Puttz phones in a burger order.  Everyone scrambles as though he owns the town.  The desolate establishing shots of the golf park present it like prison rather than family fun center. Social commentary on wage slavery?

Mini Golf Massacre is more comedy than horror. If you take it lightly, with a few beers and friends (or people who worked on the production), it’s an enjoyable watch. If you’re looking for a serious horror film… It’s probably not for you.  The structure and necessary pieces are there, but it lacks polish.

Voyeur Rabbit is the 2008 directorial debut of Brandon Halsey, the self-published author of Assorted Poems & Purple Prose.  It follows an anthropomorphic Rabbit with reality issues and a drug problem as he struggles with his shortcomings and dissatisfaction with life.

The film owes much to Halsey’s poetry, the static shots, pacing, and muted tones mirror and jive with the driving narration.  The visuals present the Rabbit’s depression, the narration tells his story.  The narration does not glorify the Rabbit’s habits.  Stated bluntly, he takes pills.  Showers.  Obsesses over a model.  Stalks her.  Steals her trash and masturbates in her panties.  And cannot do anything productive.

A still image sequence expounds on his obsession with the model.  The images change in response to the narration, becoming progressively sexier, taking us into the Rabbit’s psyche.  A shutter snap sounds with each change, awkward interruptions of the otherwise silent narration.  Similar to Gummo.

Voice and silence rule the piece until the Rabbit takes hard drugs.  Then, a trip hop loop comes in, ferrying the viewer through a high sequence which introduces red to the film’s color palette.  Hitherto, greys and blues dominated.  An ambient synth comes in with a return to the beach and the Rabbit’s encounter with the prostitute.  The ambience continues through beach shots, home shots, and the sex with the prostitute, a splash of hollow majesty in a melancholic sea.   Static sounds blend with the music.

Halsey uses precise shot composition.  At 1:46, a real estate-ish journalistic shot of the model’s house cuts to center framed establishing shot of the model applying make-up, then an extreme close up of her eyes, to an accurate over the shoulder.  First-time directors and camera ops rarely use cuts like this.  Most other cutaways are tight close ups. This contrasts the extreme, documentary wide shots at the beach.  We can see how beautiful the world around the Rabbit is, and through close ups, the emptiness of his mind. Halsey has mastery of the camera’s emotional impact.

This is a powerful piece representing strong writing with strong visuals. The sound-visual-writing trifecta jazz, trading off carrying the experience.  Voyeur Rabbit’s multilayered construction exemplifies the artistic immersion that film could be.
We give Voyeur Rabbit an IRON REEL.

You can check out Halsey’s writing at http://brandonhalsey.com/